The proposed Chumash Heritage National Marine Sanctuary is dedicated to the nurturing of relationships to Nature and the Ocean in the deepest ways possible. The Chumash understanding and culture-based respect for Nature comes from their long and profound relationships with coastal marine ecosystems.

Other significant features include: the major offshore Santa Lucia Bank with benthic communities of world-wide significance where13 species of whales and dolphins gather and feed; three major upwellings, one of which is persistent, bringing up nutrient-rich water to feed marine life that also enhances the ecosystems of the two adjacent Sanctuaries; a 3,000 meter deep five-fingered submarine canyon through which the west coast’s only persistent upwelling flows; cetacean gathering areas and migration lanes.

North of Point Conception, Jalama is a Sacred Chumash village site. Other significant Chumash sites associated with the ocean ecology are found along the adjacent coastal terrain north to Point Sal including two 10,000 year-old sites within Vandenberg AFB.

* The site for which the City of Pismo Beach is named 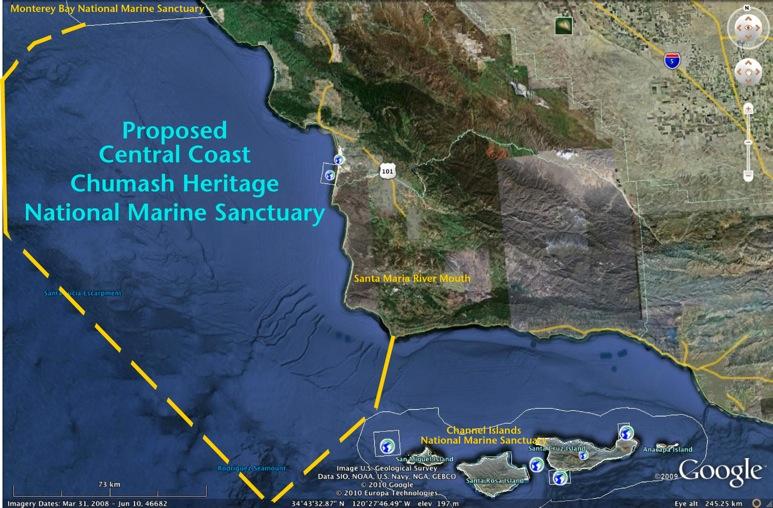 To ensure the protection of these Chumash Sacred Sites as part of the ecological, historical, cultural, educational and aesthetic resources of this area, we wish to facilitate the local, proactive approach to ocean protection that a National Marine Sanctuary brings to the management of significant marine resources. Therefore we nominate these waters for designation as a National Marine Sanctuary.