Salix lasiolepis: commonly known as the arroyo willow, is a member of the family Salicaceae. Originally from California, this deciduous shrub or tree can be seen in bed ‘Q’ in the Preview Garden. It grows from 9 to 15 feet high and a little wider. It is a fast grower and has yellow catkin flowers about 2.5 inches long during the winter. Its leaves are light green and grow to about 4 inches long. It grows naturally along streams like other willows, so dry streams are its natural setting. Arroyo Willows are separated into male and female plants. Ours is female, as shown in the close-up of the catkins with their black- tipped pistils. It is a good soil stabilizer. It is essential for food and cover, but can’t survive deer. It attracts butterflies and butterfly larvae. It needs well drained soil and tolerates sandy soil but not clay soil or rock. It likes water and should be planted in full sun or some shade. It is not too ‘garden tolerant’ and prefers a natural setting with no human influence. It grows along streams even if they dry up in the summer. 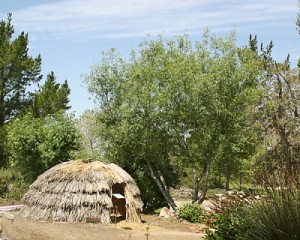 The Chumash trimmed and used branches as poles to build huts. They used the bark for rope and chewed the bark to relieve toothaches (it contains salicylic acid which is found in aspirin). They also used the willow to make bows, tools and cradle boards to carry babies.

The Spanish refer to it as Saus or Sauz.